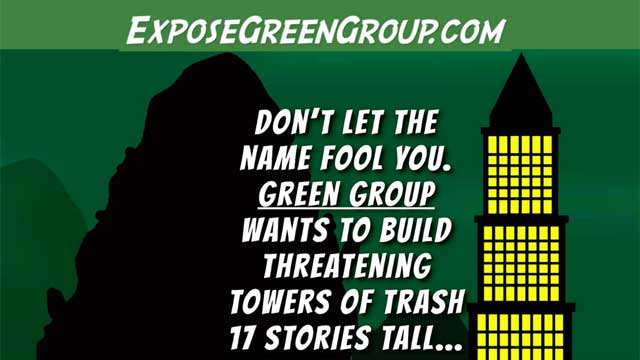 The news that garbage company Green Group has been involved in the proposed Pescadito landfill has earned the Laredo legal battle a new spot on the popular website tracking the controversial company.

www.exposegreengroup.com has been documenting the secret political deals, rule breaking and trail of coal ash troubles involving Green Group since the company tried to get a permit to put a giant dump along Highway 6 near Hempstead. That dump permit was eventually denied by the TCEQ, but Green Group is trying to put another site near Lockhart.

It has long been rumored Green Group had plans for other dumps. Now we know the place for one of those planned dumps.

Green Group’s involvement in the Pescadito toxic dumpsite fight was confirmed during a sworn deposition last month of the owner of the land for the planned dump site, C.Y. Benavides.

During his sworn testimony, Benavides claimed the partnership had ended and he would commit to not having Green Group involved, but many residents are suspicious Green Group will emerge if the TCEQ grants Pescadito a permit after hearings this summer.

“Green Group is infamous for all the coal ash troubles in Uniontown, Alabama and since the Pescadito site will likely take coal ash and foreign waste, the footprints are obvious,” says Wayne Dolcefino, President of the Houston-based investigative media firm Dolcefino Consulting. “If Green Group was in and now out, the question should be who is really going to run this potentially dangerous waste site.”

The sworn depositions in the Laredo fight, the political opposition and the highly personal eight-year battle near the border are all documented on exposegreengroup.com. The website also links to the website for Citizens Against Laredo Landfill, as it does for all the community fights against Green Group.

See other releases in: ExposeGreenGroup |