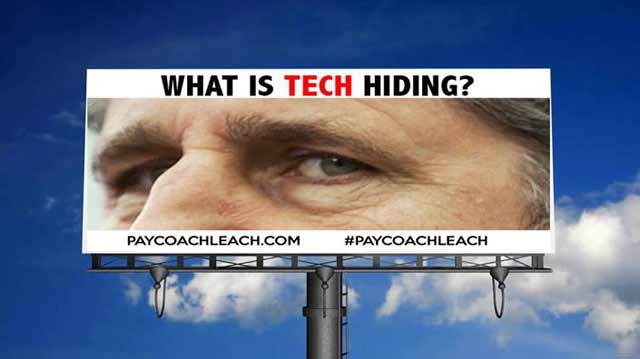 Dolcefino Consulting has filed a lengthy new criminal complaint against several current and former members of the Texas Tech Board of Regents and the university’s Senior Associate General Counsel after receiving records that prove the state school has illegally withheld public records.

The complaint also includes a call for Lubbock County District Attorney Sunshine Stanek to recuse herself and appoint a special prosecutor.

“The District Attorney’s name may be ‘Sunshine’ but her previous conduct has proven she has no interest in sunshine and government transparency when it comes to her alma mater,” said Wayne Dolcefino, President of Dolcefino Consulting.

The calls that Texas Tech hid were calls between Regents and people associated with Texas Tech such as President Lawrence Schovanec, then President of TTU’s Health Science Center Tedd Mitchell, General Counsel John Huffaker, and then Texas Tech Foundation Director Joshua Hunt, to name a few. Regents also hid calls between themselves.

The proof of TTU’s illegal conduct was uncovered after the Texas Attorney General’s Office released thousands of pages of new documents to Dolcefino Consulting that proved Texas Tech lied to donors and a state district judge about the investigation into the firing of Coach Mike Leach ten years ago. The documents contain the truth about what really happened when Texas Tech fired Mike Leach in 2009, information about sexual harassment at Texas Tech, and many, many other details.

“For two years, Texas Tech has hidden the truth and now we know there is no limit to the lies they will tell, even to a court. It is time for Tech officials to testify under oath. This case has now become a real test of the Texas Public Information Act,” Dolcefino said.

“The Texas Tech case proves how the current public records law can be abused to deny the public their right to know. Here we have a state university that hides records and outright lies and a local DA who lets them get away with it,” Dolcefino said.

Violations of the Texas Public Information Act are misdemeanor crimes punishable by up to a $1,000 fine, confinement in the county jail for up to six months, or both.

Texas Tech just made headlines for paying $6 million to former Coach Kliff Kingsbury and other coaching staff after Kingbury’s firing. Senior associate athletics director Robert Giovannetti said, “It’s part of the business, right? You understand it’s a part of the business and you chalk that up to cost of doing business and don’t let it affect the way you run your operation.”

“Tech has a more important piece of unfinished business and that is to pay Mike Leach what they owe him too,” Dolcefino said. “Until they do, it appears the curse of the pirate will keep bringing embarrassing headlines to a once great football program.”