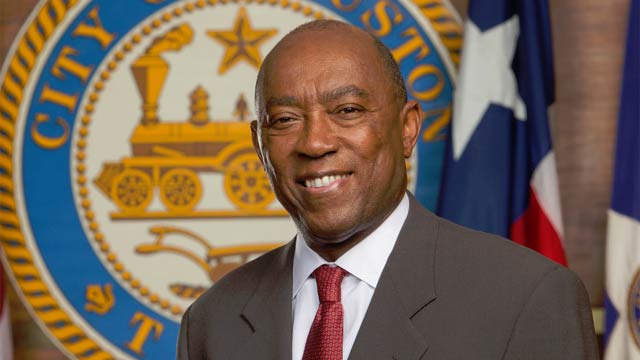 Houston Mayor Sylvester Turner just wasted $50,000 of your hard earned tax money to pay for the cost of his illegal conduct.

Look at this check for $50,000. It’s money just paid by taxpayers of the City of Houston simply because Mayor Turner hid public records.

“The purpose of filing a lawsuit is to get some answers and to get some accountability from the folks in Mayor Turner’s office,” said Attorney Stewart Hoffer.

“I want to know how my tax dollars are being spent and I think it’s only fair that the government is transparent,” said EcoHub owner George Gitschel.

It is the wasteful end of a more than three yearlong  fight to expose the truth in City of Houston Recycling deals.

“Why are we going to just throw this into a landfill when we can take it and make it into new products and share revenue back to the city?” Gitschel said.

EcoHub had been picked more than four years ago by the City of Houston to revolutionize the collection and disposal of trash, putting all garbage into one bin, reducing the need for garbage trucks, converting the trash into new products.

$800 million in private money had been committed.

But the Turner administration changed course, even kept EcoHub in the dark even while soliciting another company, a foreign company FCC to build a recycling plant here in Houston.

Competitors in that fight complained the FCC deal was preordained. Council members complained about transparency in the whole affair. So did the controller.

“Mayor, you know, when people are asking for open records, the first thing the city wants to do is to fight, to fight it instead of giving the records to the citizens,” said City Councilmember Michael Kubosh.

The mayor has been fighting the release of critical records the entire time. In 2017, Dolcefino Consulting even filed a criminal complaint against the mayor. At the time Turner claimed he wasn’t aware of any hidden records. That was nonsense. At the very same time Turner fought release of the records he claimed didn’t exist.

More than once Judge Kristin Hawkins gave an earful to city lawyers.

“Your contempt for this court has been very well noted. This is not the first time you have taken a position like this and it is offensive and you need to check yourself,” said Judge Hawkins.

“Are you really going to look at a court with a straight face and tell them that? Really? Is that really what you’re going to do?” said Wayne Dolcefino to Assistant City Attorney Fernando De Leon .

In recent weeks the city released the rest of the records. Now they are paying for their game with your money. The check is made to Hicks Thomas, who represented Dolcefino Consulting in the civil lawsuit that never should have become necessary. Attorney Stewart Hoffer was a warrior for us.

“That’s really at the core of why we wanted these records released, not just to find out what happened to Mr. Gitschel and his dream, but to make sure the City of Houston was taken care of and well represented by its representatives,” Hoffer said.

“You know why the City of Houston wrote that check for exactly $50,000? This way they can try to keep it secret from Houston City Council,” Wayne Dolcefino said. “If they’d written it for 50,000 and one penny, they would have to get it approved by the entire city council and they don’t like that kind of PR. So this check just goes into the big pile of $400 million dollar worth of money spent by the City of Houston that never goes before City Council.”

You would hope the Mayor learned a lesson about transparency but you’d be wrong. Recently we asked for cell phone records detailing all the Mayor’s city related phone calls. Look what we got: in a six-month period the Mayor of the fourth largest city in America tries to claim he made or received only one call in a typical month.

We checked past phone records and found that the Mayor had routinely conducted city business on a phone registered to Pat Strong, his campaign fundraiser and the recipient of a lucrative city subcontract.

“This is the kind of secrecy you ignored when you reelected Sylvester Turner, games hiding public records. So a clear warning to the city of Houston tonight. Cough up the rest of the phone records or let’s go back to court,” Dolcefino said.

In the meantime, take a closer look at this $50,000 check. It should have been used to keep Houstonians safer, be used for public safety. Instead it’s money wasted because of Sylvester Turner’s game of secrecy.