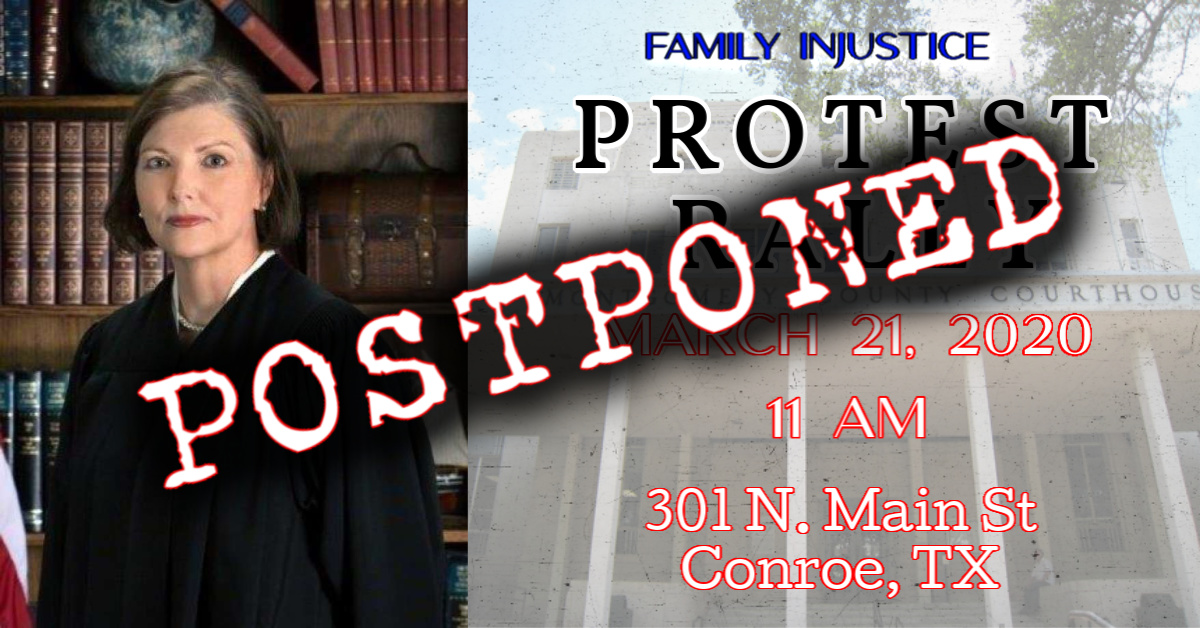 In light of recent developments and measures implemented by governments to contain the possible spread of illness, we are deciding to postpone our protest rally.

Rest assured we are not giving up the fight. We’ll gear up against the courts when everyone’s feeling a little better.

The protest rally will feature Mark Athans, the Willis man ordered to pay tens of thousands of dollars to his ex-wife even though she was a bigamist. Judge Patrice McDonald threatened to put Athans in jail even though she knew his ex-wife was lying.

The Ninth Court of Appeals in Beaumont has put an emergency hold on the judge’s ruling but Athans has spent nearly $300,000 fighting the case. He wants Judge McDonald to pay.

“Judge McDonald should be held liable along with the county for criminal negligence and the coverup in this case,” Athans said after the Court of Appeals stepped in. Athans wants the governor to remove Judge McDonald from the bench.

Since the Athans case hit the headlines, victims of Judge McDonald’s injustice have been coming forward with horror stories.

“This protest will be a chance to send a message to Judge McDonald and other judges in Montgomery County,” says Wayne Dolcefino, President of the Houston based investigative media company, Dolcefino Consulting. Dolcefino Consulting has been exposing bad judges and corruption in the family courts for years.

“We want everyone who has been mistreated in a divorce and/or custody case in Montgomery County to come out and join this fight,” says Dolcefino. “We want to send a message to the folks in the capitol in Austin that enough is enough.”

Whether you want to show your support for Mark Athans against an unfair ruling or have your own beef with Judge McDonald, RSVP for the protest on Dolcefino Consulting’s Facebook.

See other releases in: FamilyInjustice news |